In St. Augustine, FL where I live, we have the FLORIDA SCHOOL FOR THE DEAF AND BLIND,  known here as FSDB.  Needless to say, we have a large number of students and their families from all over the country and many settle here permanently.  FYI, this is the school that Ray Charles, the famous singer went to.

Every year the St. Augustine Art Association and FSDB sponsor an art show that features tactile art for the students.  I have never submitted an entry until this year.  I had entered a painting into the "Cutting Edge" show a few months ago that featured a "Carnivale" dancer with all her regalia including jewels glued to the canvas and a feather pom-pom sticking out of the canvas at her head dressing.  It didn't win anything, but it was a last minute entry that I hadn't been able to finish as I had wanted.  People liked her though, so I kept her around.

The Tactile Show was the perfect opportunity to complete what I wanted to do in the first place.  Let me explain.  This canvas is a 24" square gallery wrap (2" deep) that I had tilted up into a diamond shape.  I painted the arms of my dancer outstretched into the corners.  I thought at the time that it would look great if I had some hands to affix to the edge of the canvas so that it appeared that her hands had broken through into reality! I couldn't find any on short notice in this small town, but I haven't forgotten the idea.  When the tactile show was announced, I ordered some mannequin hands (such as nail techs practice with) and have attached then to the canvas with screws so they are removable.  I also embellished the hands and her headress with many colorful feathers such as a dancer's costume would have and added even more bling in the form of sequins, bracelets, and GLOVES. You see, the hands didn't match when they came in, so I was in a panic. I tried to paint them but that was a disaster!  The paint was sticky and wouldn't dry, so I went crazy trying to find SMALL gloves that would fit those hands.  Finally, I found a pair at a local consignment store. When I told her the story and showed her a picture, she insisted on GIVING the gloves to me!  She wanted to do her part in supporting our local school. And she plans on going to the show to see my piece in person!  All said and done, it came out really cool! I didn't really care if it won a prize or not, I was just happy to execute my idea. I named it "BREAKING FREE" and wrote a little story about her for the students.  "she lives a life many consider glamorous, but closes her eyes and dreams of breaking free to pursue her dream of becoming an artist", LOL..I had to put in that plug.  I also added a note giving the lady credit for donating the gloves.  (PR is always important)

The FSDB students came in and made up the signs in Braille for the other students.  I was anxious to see all the art that had been submitted.  It was all very nice and of course, highly tactile as required.

I have "before" and "after" photos below for you to see the difference.  It was a project that I really enjoyed doing!


I think these hands look so good! As if I had planned this all along, wait, I did! 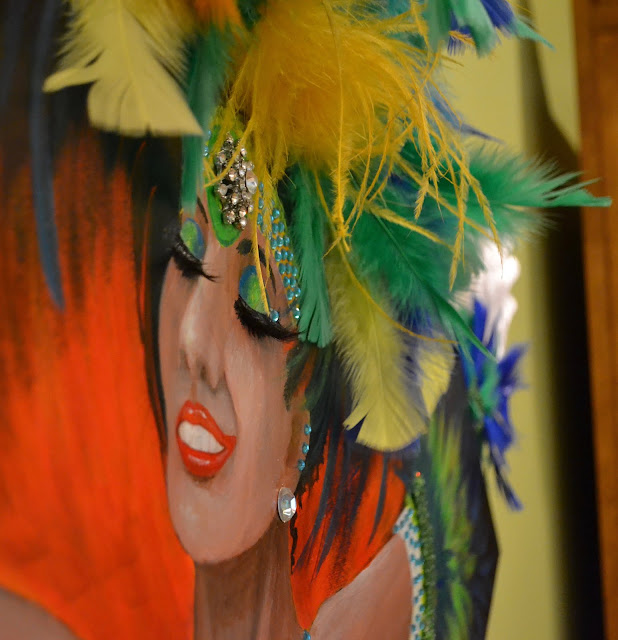 Here it is easy to see her eyelashes. I had to add a little jewel on the corner of her eye due to some dried glue.  But it ended up looking cool!  Over all,  I am very proud of my "Carnivale" dancer who's
"BREAKING FREE"