I listened to an interesting podcast the other day about a man who uses FACEBOOK to sell paintings.  He has only been doing it for two and a half years but it has been so successful that it is now the source of 50-60% of his income!. That certainly made me sit up and pay attention!

He is a grandfather, so not too young, and was not a fan of social networking, like me.  We didn't grow up with electronic devices in our hands, trust me.  Anyway, he was pushed into this mode of selling by a friend who set everything up and showed him how it was done.  He started posting one painting every 1 to 3 weeks, but absolutely no more than one per week he said.  But the interesting thing he did was that he told the story behind each painting.  In other words, how, when, why, etc the painting came to be.  Under the good photo he published the Name, medium and price.  He emphasized that he took several photos in different light and picked the best one. That is VERY important, and I agree with that!  He also always starts out his story with the same words each time. He says, "HELLO EVERYONE" and then begins the story. I think that is because people see those words and instantly recognize the post as his and they love his stories!

The gentleman said he at first didn't post the price but that didn't seem to work well.  People would ask the price but he wouldn't see it in time and thus lose the sale.  Now he adds the price (keeping it as low as he reasonably can, in his case $500 or less) and it has worked well.  He also only posts smaller paintings. He said it was slow at first but grew fairly steadily, then after a year or so. it just took off.  Now, as I said, it represents 50-60% of his sales and he is able to be a full-time artist.  That's saying a lot!

I really enjoyed his interview and it got me to thinking that I could do something similar!  Of course I would use a different salutation on mine.  I decided to say "HELLO  FRIENDS" when I post a painting.  I just posted my first painting in this fashion and I will let you know if it works for me.  It's interesting because the gentleman said he just posted to friends,  personally I think it should be public.  Maybe he's not aware that you can post publicly. I also post mine on INSTAGRAM as well.

If you decide to try this as well, that's great!  Please let me know how it goes for you and if you have any different ideas.  I would love to hear your experiences!

I also have an interview about a gentleman who had success selling his paintings on eBay, but I haven't had time to listen to it yet.  I will try to get to it in the next few days and let you know how he did it, OK?  I think that forum could also be very lucrative if done right.

The painting I chose to post first in FACEBOOK with the story and price was my family of mallard ducks.  It has a very nice story behind it and is actually funny.  I also posted the photo I worked from.  I will show the painting below and yes, I will tell the story also.  Thanks for looking!

I saw this mallard family taking a walk down on St. George St. one morning. Now, for those not familiar with St. Augustine, St. George St. is for pedestrians only.  She was oblivious of the crowds watching and taking their photograph.  She stopped all traffic however, including all cars!, when one of the three babies wandered out into Cathedral Place St. where cars travel.  She fussed and squawked so loudly at the baby that a huge crowd gathered and took pictures of them.  Interestingly the other two babies stood on the sidewalk waiting for mom and brother to return.  Mom, in the meantime yelled and squawked until little brother finally got back to the sidewalk and joined the patiently waiting siblings.  Then mom shook her tail, squawked one more time and with her head held high, they all started off down the sidewalk again going who knows where. She actually was applauded by the crowd!  Well, right that moment I decided that she needed her portrait done.  I also wanted to capture the adventurous spirit of the little brother who wandered, as boys will do. 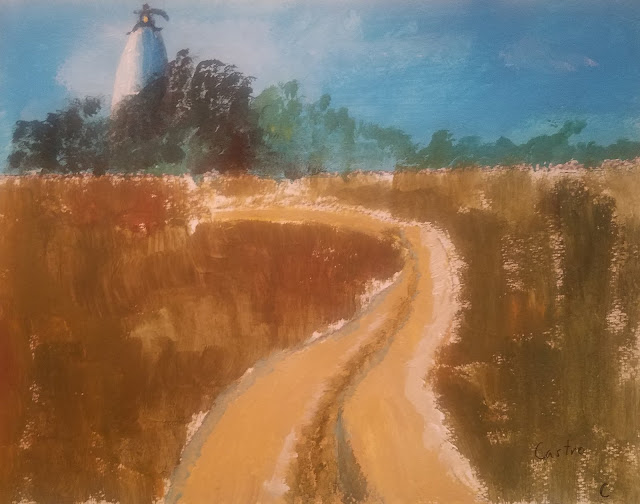