WHEN YOU HAVE A DIFFICULT PORTRAIT TO PAINT


I have some friends whose daughter was not well and she finally lost her battle.  It was very hard on them, as the daughter refused to have her picture taken as an adult, so there were very few photos to remember her by.

Since I am now doing portraits, they started asking me to do a portrait so they would have something to keep and remember her by.  But with very few pictures to work from,  mainly poor quality selfie photos taken from her social media, it was very difficult to get a good likeness!

This is a case where having my 1/4" clear grid really helped.  I enlarged the best photo,  but it was very grainy.  I ended up placing one grid over the photo and another over the painting to constantly compare her measurements and  locations of nose, eyes, mouth, etc.  The biggest problem was that they wanted her portrait at a younger age than the photo and they wanted to keep the glasses.
So, I took a deep breath and dived in! 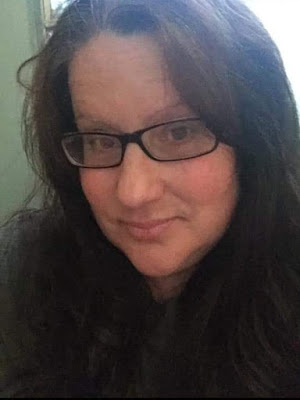 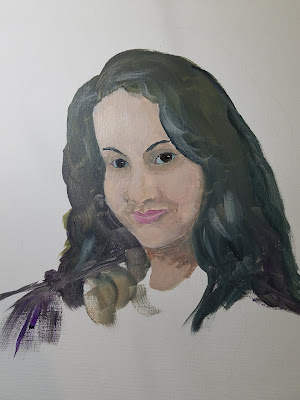 I roughed in the shapes and hair on the canvas.  The background was to be her favorite color of blue and her outfit black, what she always wore. 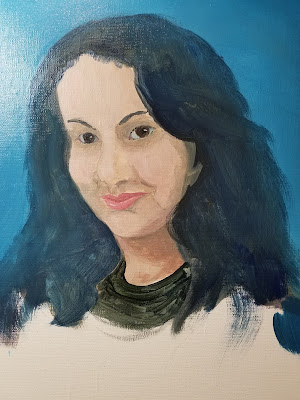 I have the blue background in and now the skin looks too light, a common problem. It is important to plan the colors and get the background in early. Her skin has both red and yellow tones which is also more difficult. The basic shape is correct but I can see that it doesn't look enough like her. 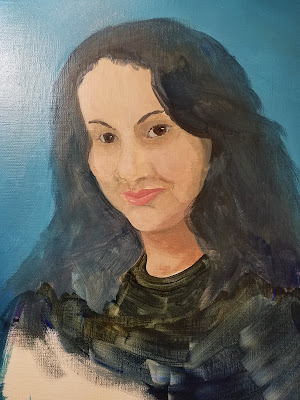 I have the color better now and have made a few adjustments to the shape of her face.  It is coming closer to what I want now, but she still needs work! 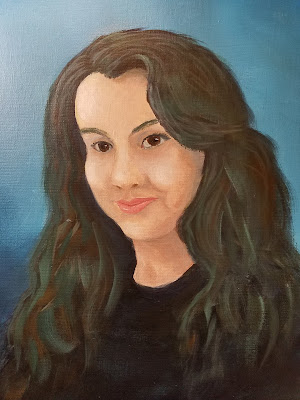 I showed this to her parents and they immediately recognized her, but no one else did.  Apparently this is how she looked in her teens.  However, I wasn't satisfied even though it is pretty.  I wanted her a little older.  More work to do... 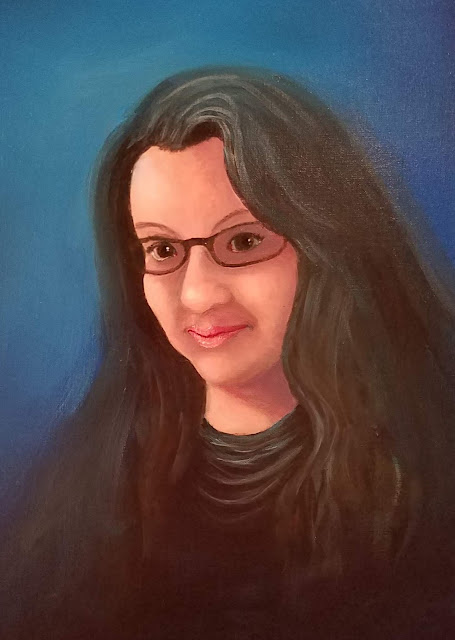 I worked on the portrait carefully measuring and remeasuring with the grid system for over a week until I was finally satisfied with the result.  She is closer to the photo while still looking younger.  That was NOT easy!!  Since both her hair and top were black I added brown to the hair and folds in the top to differentiate between them.  Notice the edges, hard against her face (focal point)
soft around her hair and disappearing at the bottom.  They chose a frame to go with their home decor and I mounted it for them. The final photo is below.  Enjoy! 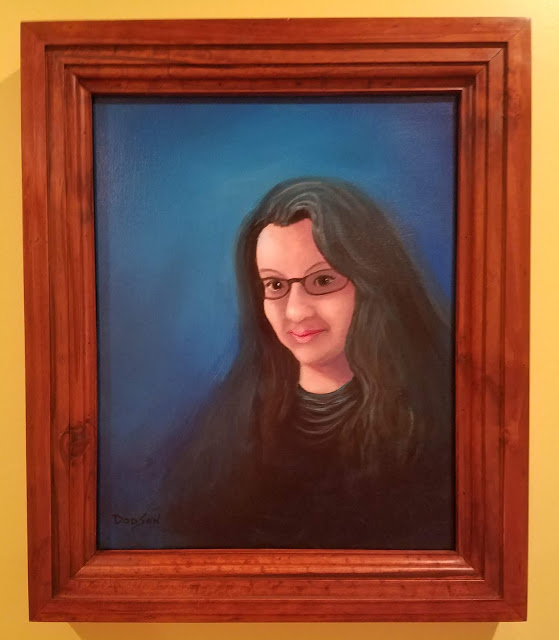 Now you can see why I added some brown to her hair.  This would not have been my choice of a frame but it is what they wanted.  As long as they are happy, right?  When they picked up the portrait they cried and I noticed they were talking to her as they walked away, a good sign.