COMMISSIONED TO DO A LARGE POUR - ON GLASS!

I did a HUGE poured painting on a 30" x 56" piece of glass, and I am very proud of it!  It is along the lines of my "Ocean Meditations" paintings, but it's not a big wave.  It was commissioned by a lady who lives on the Gulf Coast of Florida.  She also has a farm here in St. Augustine and someone showed her my work.  She contacted me and told me she had a large piece of glass sitting in her barn that she had been holding onto until she could decide what to do with it.  It had come off her son's desk and was both heavy and expensive.  She couldn't bring herself to throw it away so she just put it aside thinking eventually she'd think of a use for it.  She told me that when she saw my "Ocean Meditations" paintings she immediately said, "That's what I want on that glass!"

My purpose of this particular blog is to show my process of painting this scene.  It was a long arduous process to get to where I was happy with it because this is the largest pour I've done, and it was on glass!  I finished it with resin which is also a first for me, but I took photos along the way to show you and I'll explain the process.  Hopefully you can see some of my thinking, or rather frustration, during the making of this painting.

When the glass arrived I had my 6 foot table ready to receive it.  It was heavy and as wide as the table, so I covered the floor with a large piece of plastic to protect it from spilled paint.  I also placed three pieces of wood under it to hold it up off the table surface.  You can see them in the first photo below.  You can also see that the glass is thick (1/4") and the side I painted had a texture on it, so that was a good beginning.  However, I wanted to be sure that the paint adhered well, so my son-in-law suggested I use an adhesive promoter.  This is a spray found in auto parts stores, in the paint dept. I found mine for $7.98 a can.  I sprayed it thoroughly, giving it two coats and let it dry overnight.  It only takes a few minutes to dry, but I wasn't ready to start painting.  I needed to get my head prepared for this one! 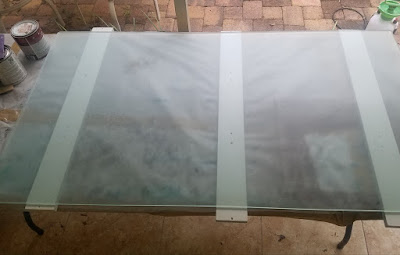 I couldn't start on it right away, so it ended up sitting for a couple weeks while I fulfilled other commitments.  But finally the day came to get started on this painting!  I had been experimenting during those weeks with different paints and pouring mediums as the client wanted to be able to place a light behind the painting. That required more transparency in the paint, now I felt I finally had the proper combination and was ready to start.  I also knew this was going to take a lot of paint!

It took me over an hour to mix up all the paint required but I got it all done and ready to pour.  She had said she wanted a wave so that's what I aimed for.  I carefully poured all the paint and then moved it around in the form of the wave.  Sadly, I was just not happy with it. I felt that the glass was far too large for just the one wave that she asked for.  I showed the photo to my client via a phone call and we finally agreed that I should do it over again.  She told me that she had confidence in my work, and that when I was happy with it, she would be happy too.  What a nice thing to say!  As you can see, it's ok, but not great like we wanted. 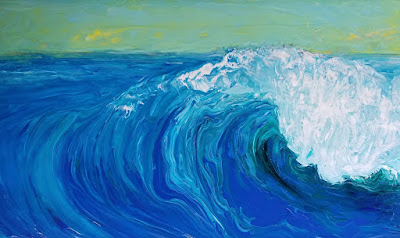 During our conversation. she sent me a photo she had just taken of the sunset over the gulf.  It was beautiful!  The rays from the setting sun were amazing and the water as extraordinary.  That was what I wanted to paint!  So I set about stripping all the paint off the glass to start over.  In the process, I discovered that the pouring medium I had used was peeling off in sheets.  Well, that was a disaster averted, the pouring medium I had used was made for peeling. If I had kept the painting, it would have eventually just peeled off the glass!

I decided to just go back to my trusty Floetrol pouring medium that I have always used.  I cleaned the glass well and resprayed the adhesive promoter, and the paint went on exactly as I knew it would and held tightly, thank goodness! This time I was much happier!  The painting fit nicely, the composition was good and the colors worked well together.  Yes, there were adjustments to be made, but by and large I liked it!  It was a simple seascape with the setting sun, but it was beautiful. I decided to let it set for a day and come back to check and see if I was still happy.  Well, I wasn't. 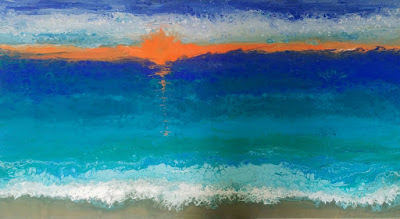 When I came back,  it was ok, but I felt it needed some yellow in the sun.  So I mixed up some and pour a small amount in the round area of the sun.  Then I added a touch of white in the center.  Better!  But then, I decided it needed yellow further out the sides too. You guessed it, I added more. It was getting better.  I also added reflections in the water and some yellow in the water too. 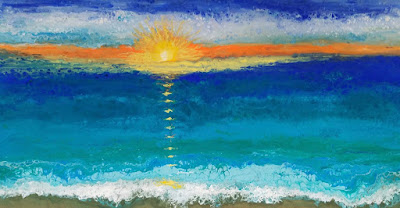 I let it set another day and came back again.  This time I decided there were too many touches of yellow in the water making it look artificial.  So I went back and took some out, and made them more natural looking.  Much better.  Then I decided that the yellow needed to go all the way across and blend in on the right side like it did on the left.  I also wanted the orange strip to be lighter.  I mixed some of the original orange I used with some of the yellow, added a touch of silicone for a few cells and poured it over the orange strip.  Now I was happy!  I invited my client over to see it as she was in town, and she was thrilled!  She kept looking at it and saying ooh, I like this, and oh, that's great as she pointed to different parts.  We hugged and I told her that it would be a few weeks yet as it had to dry thoroughly.  We also talked about how she was going to display this piece.  It has no hangers.  I happened to have an easel setting there, and she suddenly looked at me and said  "could I get one of those easels, stain it grey, hang it on the wall and put the painting on that?"  I told her it would have to be a heavy one with a holder on the top and bottom, but it should work, and it would look great! She could even mount a light on the top of the easel.  She left with that idea in mind, but later told me she had decided to mount it on a large board using boat cleats.  It will be beautiful either way, but in the end she decided on two vertical boards with boat cleats attached.  that way she could slide a large light behind the painting.

Because acrylics dry matte, I decided to put a coat of resin over the painting instead of varnishing it.  I knew the resin would really bring out the depth in the colors and protect it at the same time.  Resin can be tricky, but as long as the two parts are exactly the same amount it works well.  Since this is on my back porch, we had to make it dust-free. We finally decided instead to move it inside to my art room after I read the instructions on the resin which said the temperature must be at least 75 degrees to mix and pour the resin components.  It is wintertime and this is a valuable painting, so I wasn't going to take any chances!  After soaking the two bottles in warm water for a little while (so the resin would pour easier. It's very thick)  I carefully mixed the resin and applied it over the painting.  I then had to torch it for about 30 minutes to make sure all the air bubbles were popped. It looked good, but then came the waiting period.  Hopefully, we had made the room tight enough to keep out as much dust as possible.  In the end, it was beautiful!  I let the client know it was done, but resin must cure for 72 hours, plus it is vulnerable to scratching for another week or two.  We both decided it needed to stay in place for at least 1-2 weeks to keep it safe until it's thoroughly cured and hardened.

I must say that we feel this is my best work yet!  The depth, the colors, everything in fact, is outstanding!  I am so proud of this piece.  I just wish that photos could do justice to it, but the fact is, it is one of those pieces that must be seen in person to be truly appreciated.  Actually, most artwork is that way.  A camera just cannot capture all the beauty and depth that the human eye can see.

I enjoyed creating this piece so much that I think I will start looking for pieces of heavy glass at thrift stores and do some more of these glass paintings.  They are simply spectacular!  I love the idea of recycling when possible and it makes for a good backstory.

My husband and I have been invited over to the gulf coast to see the painting when it's installed in it's new home and we jumped at the chance!  I'll post pictures when we come back. Thanks for looking!  Now, go create your own masterpiece!