MY FIRST PORTRAIT IS FINISHED!

The local art association sent out notices of a show called "Our Human Condition,  Figures and Portraits".  This is the perfect opportunity for me to paint my first complete portrait, but who do I choose to paint?  I went through all my photos and decided on a photo I took last July of the young daughter of some friends.  Her name is Kelsey and she was eating a cupcake.  Of course it was all over her face and her expression was, am I in trouble?

It was an adorable shot and one that I knew would make a really nice painting if I could capture it.  I had to do this one in acrylics because oils would not be dry by the entry deadline, but at least I saw the notice in time to do an acrylic painting!

Choosing an 11 x 14 linen canvas, I printed out the photo and transferred the photo to the canvas using the grid method.  Then I got to work.  This is a head shot with her right up against the table, her mouth barely clearing it and her little hand beside the cupcake.  I got the form of her head, hair and the background done and then started blocking in her features.  I was constantly checking my measurements with a caliper and my brush.  Even so, I could tell there were some minor measurements that were off.  Did I say this is my first official portrait?  Well, I was getting a little frustrated so I contacted my cousin in Pennsylvania who does portraits on porcelain professionally.  She is very good and teaches portraiture.  She critiqued my painting and gave me some really good pointers.  When I applied her suggestions,  the portrait came into focus and looked like my subject!  They were minor adjustments, but critical nonetheless.

When I showed the portrait to my friends, they instantly recognized their daughter and asked for the painting!  I had not told them I was doing it and I'm not even sure they knew that I'm an artist.  That surprised me, as I've known them since they were young.  Long story short,  I told them it was to go into the show for a month, but after that they could get it from me.

While this is not the quality of an oil portrait, I feel it is very good considering the difficulty of getting subtle shading in acrylics.  Thank goodness I have some experience in doing that and using retarders helped.  Plus, getting the skin glow in acrylics can be extremely difficult.  So all things considered, I am proud of this portrait.

I have photos of the process below, as well as the photo I painted from.  I hope you like it! I certainly enjoyed doing this portrait, and I am determined to do many more, only they will be in oils!  A suggestion if you want to do portraits, go to a craft or office supply store and pick up a pack of transparent sheets for printing.  If you have an Excel program on your computer, draw up a grid with the lines 1/4" apart vertically and horizontally and print it out on the transparent sheet.  Use it to make
comparisons of your subject and your painting.  It is invaluable for getting the likeness correct!  Hint: The subject in your photo and the painting must be the same size for this to work! 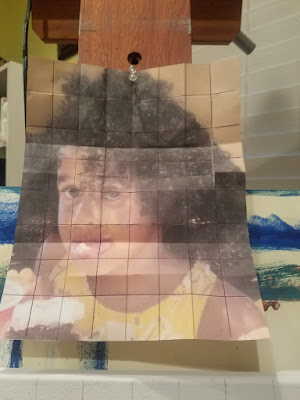 First I printed out her picture, then I made grid lines all across and down the photo about 1" apart 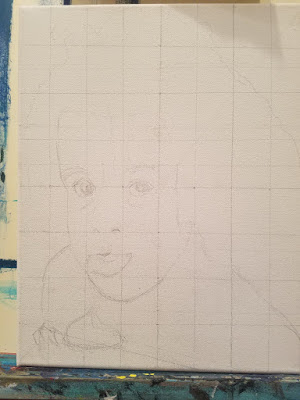 Here, I have transferred those grid lines to the 11 x 14 canvas and matching the lines on photo, I transferred Kelsey to the canvas 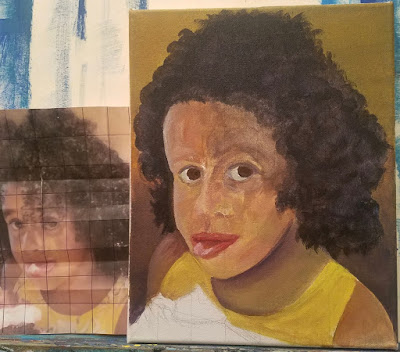 I have blocked in the features of her face and shoulders.  Notice that I have the print-out of her face right next to my canvas so I can quickly refer to it. 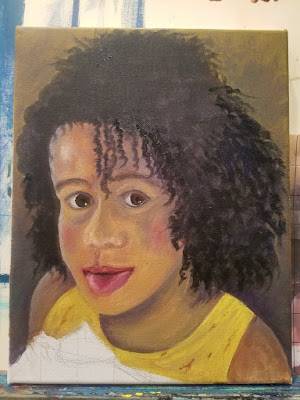 I have made some progress with the portrait, but it's not looking a lot like Kelsey at this point. 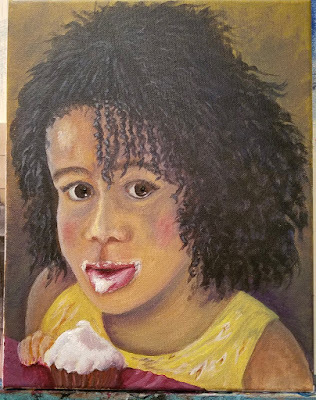 At this point, I contacted my cousin.  She helped me to zero in on some of the problems that needed to be corrected.  Again, this is my first portrait!  To start with, I had her forehead too wide and her cheek was too wide, plus her mouth was too far below her nose.  I put the cupcake and icing in too soon obviously!  Kelsey has a slight lazy eye, but I don't want to emphasize it in the portrait while I do want it to look like her.  That's tricky! 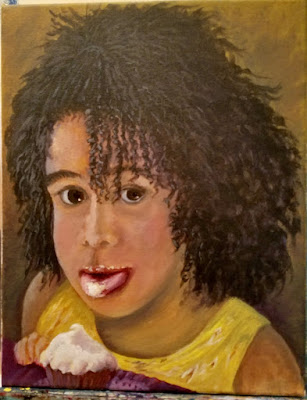 It's looking better, but I still don't think that the portrait is close enough to Kelsey's likeness.  The mouth is still to low and her chin is too round.  I also have her left eyebrow too close to her nose. 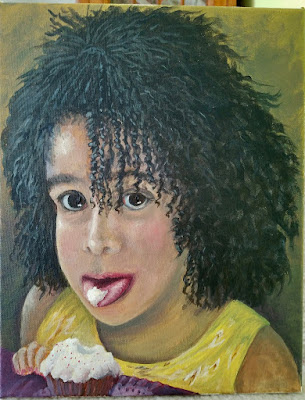 This one looks much better!  Remembering that this is acrylics, not oils,  I think it is looking pretty good.  It is very difficult to get the subtle variations in shading with acrylics so I must go very slowly.
I''m going to contact my cousin again and have her do a final critique for me, but I am much happier than I was.  I think it is very close to being done.

After studying the painting and comparing it to the print-out of my photo (which wasn't the best quality) I realized that I had her tongue wrong. In the photo, her tongue was actually curled up.  So, back to the easel again!  While I was at it,  I did some minute comparisons and found her right eye was up too high and her right eyebrow was too close to her nose.  That too was corrected.  Finally,  I moved her hair band over to the right to center it better, made it yellow to match her top and refined her fingers and shadows under her eyes.  Just a few minor touches and I think she's done and off to the show!  I went out to get a frame and the final photo is below for your enjoyment!  See you next Friday!