Except for a few minor touch-ups, it is finally finished.  Yea!!  this painting has taken me over a month to do.  I wanted it to be special as I love horses and the highlands.  What a better subject than to combine loves?  These are Connemara horses as I mentioned before.  They are from Ireland, are a very sturdy breed of horse, and are usually white.  So this painting is the Irish Highlands.  They can be very stormy and brooding.  Hopefully I captured that feeling here.  The clearing storm has made the grass very green as it can be in Ireland.  The stallion has stopped and is looking out toward that green grass as he recognizes that he is finally home.  The mare with her head turned back is waiting for him to continue.  She is his lead mare and is about ready to foal.  What a poignant story to tell.  At least I hope you see the story here, and are moved by it.  BTW, this is a night scene.  After thinking about it for some time,  I have decided to name it "HOME TO THE HIGHLANDS".

Speaking about names...they can be very important to a painting!  We all are seeking to tell a story when we paint.  The name can get the viewer involved in that story if it is a good name.  A poor or average name can leave them uninterested.  So, take some time as you paint to come up with a good name!!

I have also started another painting for the "Nature and Wildlife" show.  The entry fee is $45 for 1-3 paintings.  So might as well do three right?  We have to take pictures and submit the photos.  They decide from the photos which paintings will be allowed or "juried" into the show.  Photos are difficult to get just right but you see how important they can be.  The actual judging of the art will be done once all the paintings that are "juried" in are hung at the Art Association.  With people competing from all over the United States and other countries as well, you begin to see what a privilege it is just to be "juried" in! To win one of the prizes is an outstanding honor!  I believe that approximately 100 paintings and sculptures make it in and there are eight prizes.  Amazing!

Last year I submitted three and one made it in. You can now see why I was so excited.  Hopefully this year at least one of my three will make it in.  I would be ecstatic if two made it in!  It has happened, but not often apparently.  The gentleman who won last year had two paintings in the competition.  He is an outstanding artist from Russia.  I am not in his class of ability but I will continue to work and improve and who knows, maybe one day, right?  For now, I am happy to get in and maybe win one of the lower prizes.  The more your work is seen the better off you are and thus more likely to be accepted into a gallery.

One more thing.  When you submit a painting into a competition it is imperative that it be framed in a very high quality frame!  It is so important that the frame can be the deciding factor in your painting being accepted or not.  It may sound funny but believe me, it is not.  If they are down to having room for one more painting and they like two,  the frame can definitely be the deciding factor!  I have been told this by judges!

Ok,  I have talked enough.  Below are two pictures of my painting and yes it has a very nice frame.  I was fortunate to have found it at a shop for a great price due to a small nick.  I fixed the nick and now have the great frame I needed at a reasonable price.  They can cost hundreds of dollars! It is gold, but I am going to get a bronzing rub and darken it somewhat as my painting is very dark and the gold is too bright I think.

BTW, the deadline for the submissions is June 5th, so I have plenty of time to finish the second painting.  I chose the canvas I am using for it because it is a special size I had made to fit another nice frame I had.  I haven't decided yet which one I will submit for the third.  I do have one in mind though, and even though it has people in it, it is a landscape.

So for now enjoy the paintings and of course, Thanks for looking! 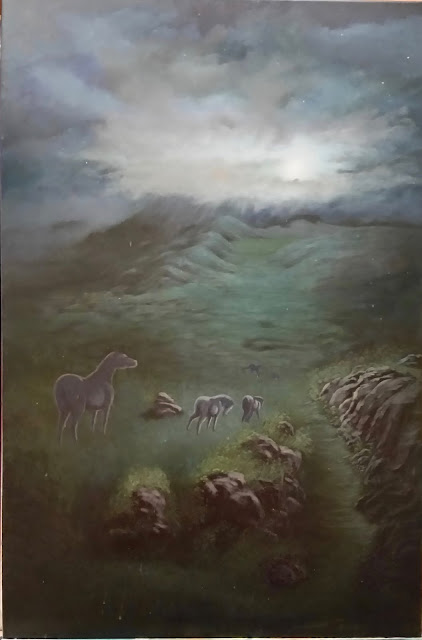 This is how the painting looked when I started working on it the second time. (after the month or so)
The first thing I did was remove the "ditch".  I had liked it but realized that it drew the eye too much so it had to go, so I filled it in with rock and proceeded from there.

I still think I have a few things to do to this painting.  I will add more grass among the rocks and bring up the rock highlights here and there, but over all I think I am done.  Of course a week down the road and I may do more like take out the rock between the horses.  That is why we take our time!  We always see things later that we miss earlier, so to speak. 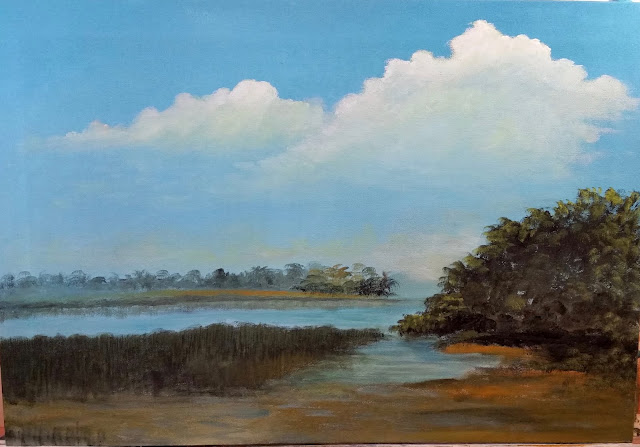 This is the second painting I have started.  I am working from a photo I took a year or so ago.  It is just roughed in and needs much more work.  I will post updates as I go along.  I don't have a name yet either but I am already thinking about it.