I have just been given the opportunity to display my paintings in Jacksonville, Fl at the most upscale Antique Mall/Interior Design Center in North Florida.  Needless to say, I am thrilled!  I was given a wall on the main aisle to showcase my art.  They were particularly interested in large pieces of art and I was happy to comply.  It works well for me as my small pieces are in demand here in St. Augustine since tourists prefer something that will fit into their luggage.  But for art shows larger pieces are in order.  So this new venue is a great way for me to show and sell them after the art shows!

I forgot my camera when the art was hung, so I will have to return to get the display on film for the blog.  Hopefully next week I can show it to you.

I painted another large painting the other day.  I got the bug to start painting later in the evening and ended up going to bed at 4 am!  You ever do that?  Probably most artists do that from time to time.  I was on a roll, so to speak, and didn't want to spoil it so I refused to stop!  I got most of it done and decided to "sleep on it" and take another look in the morning.  Well, when I did, I only made a few changes.   Not bad, if I do say so.  It is a tropical seascape that is colorful and peaceful at the same time.  Meaning it has nice color, but not too much action!  It measures 24 x 48 so it is sofa sized.  Exactly what the design studio was looking for.  Made us both happy!   I have a picture of it below.  I realized that I didn't get a picture after the final touches and there is some light glare, so I will get another and replace this one next week, OK?


I also have started my painting for the 2017 Nature and Wildlife show as I said last week. I originally was going to do a family of fox(es?), but decided against it because I just couldn't get excited about it.  I then turned the canvas up to vertical instead of horizontal (more dramatic) and looked at it for a while.  Now considering it was just a wash of dark green paint, I'm not sure what I was wanting to see, but it worked!  I decided to do a painting of the Scottish Highlands with white horses instead, and make it nighttime!  Ok, so that is a big order too, but I was excited and that is a good thing.  In my experience, when you are excited about something it usually turns out well.  I sure hope it does this time too!  I will only show the first days work now and next week I will show progressive photos as I work on it.  The painting is not finished yet and probably won't be for a while.  These paintings must be very detailed just to make it into the show.  Remember it is a national show and we are competing with people from all over the country and sometimes out of the USA as well.
But, I am far enough along that you can get an idea of where I am going with it,  well maybe, and DON'T laugh, it is very rough! I'll explain more next week. Oh, and the camera makes it look lighter than it actually is.  Until then,  Enjoy what you see and Thanks for Looking! 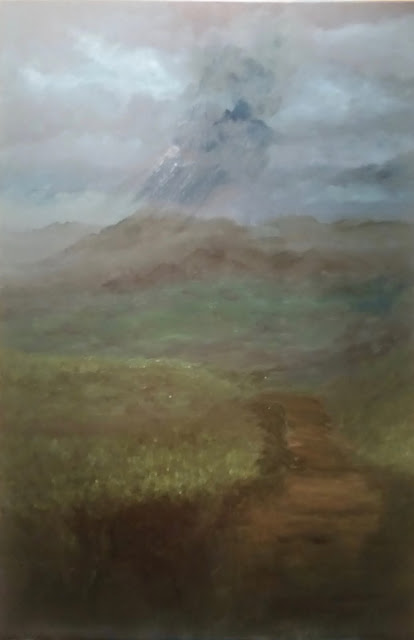