Ok, now I think I am finally done with my panther!   I had my mentor critique the painting like I mentioned and he had several suggestions.  First let me state that this artist worked for Ducks Unlimited for several years as an artist and now judges wildlife  art shows.  So he knows what he is talking about!!  He said if this painting was going in a show that it needed more.  By more, he meant wrinkles!  Yes, wrinkles.  All animals have them, and they are what make the difference between so-so paintings and really good paintings he said. Second, he said his eyes were open too wide.  Real cats don't open their eyes that wide.  And third, he needed to have greenery around and in front of him to settle him into the painting.  No real cat would be exposed like I had mine.  The good news was that he said it was good SO FAR.  So be it.  It was back to work for me!  I took several more days of work but I think I have it now! 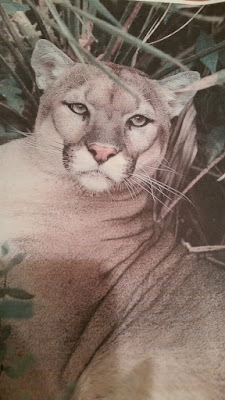 This is the picture I was working from.  (Yes, I got permission. )  Jerry said to work as closely to the picture as I could (except I could change the color if I wanted. )   As you can see, the cat is laying down and turned back on himself to see the photographer.  This is how I finally decided to paint him.  After a month of work  I am ready to show the final painting!!
Just look below and tell me what you think.  Feedback is welcome!!