A BIG COMMISSION FOR THE "OCEAN MEDITATIONS" series!

So our family physician is also a friend of ours.  He has followed my art for awhile and was instrumental in getting my artwork into the office where he worked.

He recently moved to a new medical group and suggested that I contact them as well to show my art.  I was busy at the time working on my art studio so it slipped my mind.  The next time we saw him, he brought up the subject again and in fact bought one of my "wave" paintings for himself.  The one he purchased was what I call a "collage wave" as it consists of several small (5 x 7) paintings that when put together form a larger wave.  He fell in love with it and he insisted that I get in touch with the head company about purchasing some of my artwork for the new office complex they were building in Jacksonville, FL. (their logo happens to be a wave)

Well, he decided to direct matters and contacted them himself because I soon received a phone call from the head office asking me to present some artwork and prices.  Ok!  I sent an email with samples of what I could do for the price range they wanted and long-story-short, they ended up ordering 6 large paintings!  Thankfully  my studio was finished just in time to do this project!

They chose 30 x 40 single waves on gallery wrapped canvas.  Now I have been doing these waves for several years but mostly small 8 x 8 paintings, certainly never anything this large!  Previously the largest I had created was one that was 16 x 40.  It now hangs in a lawyers office in Daytona Beach, FL.  The large wave paintings for the medical facility will be coated with resin when dry, which is an extra step and a lot more work, but it will be so worth it!

These are very complex poured paintings which may sound like an oxymoron. Most people think of poured paintings as "just pouring paint on a canvas".  But that is far from the truth in this case.  These begin with typical mixing of all the colors to be poured and that alone can take all day!  But then I design each wave and move the paint around with several particular tools I have designed over time, then of course comes the heat torch, and more tools, and then more paint strategically placed.  The end result is my wave that looks like real water...with personality!  Even though I often use the same colors, each one is distinctly different and beautiful!  No two are alike.  I have never grown tired of creating these pieces of art and they have become very popular.  That makes me happy!

Below are some of the different waves I have created.  First is one of my 8 x 8 waves, and next is one of the collage waves.  It took me awhile to figure out how to get the collage to work out, but once I had the design down it was easy!

Enjoy and I hope to post photos when these new waves are delivered and hung at the new facility next month.  Thank you so much for your support and I will try to get back into the groove of posting regularly again! 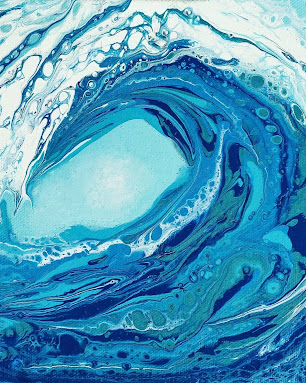 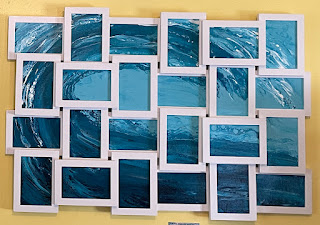